In northern New Jersey, the torrential rains generated by Hurricane Ida’s remnants brought about destruction across multiple communities, and many families still temporarily stay in hotels, with relatives and friends, or at local shelters. Tzu Chi USA’s New Jersey volunteers mobilized swiftly in early September alongside other charity organizations, such as the American Red Cross, Bergen Family Center, and the Multi-Agency Resource Center (MARC), to deliver their love to flood survivors. Volunteers’ initial flood relief distribution for impacted families took place on September 11, and a second distribution was held on September 22.

And after completing their assessment, Tzu Chi volunteers also learned that a considerable number of affected households came from the city of Elizabeth.

Warmth And Peace Of Mind

With the help of Jessica Martinez, an official from the City Hall of Elizabeth’s Office on Aging, Tzu Chi volunteers arrived at the APA Hotel Woodbridge in central New Jersey to offer relief supplies On October 2. In total, 38 families affected by the disaster received eco-blankets, face masks, and cash cards at the distribution. 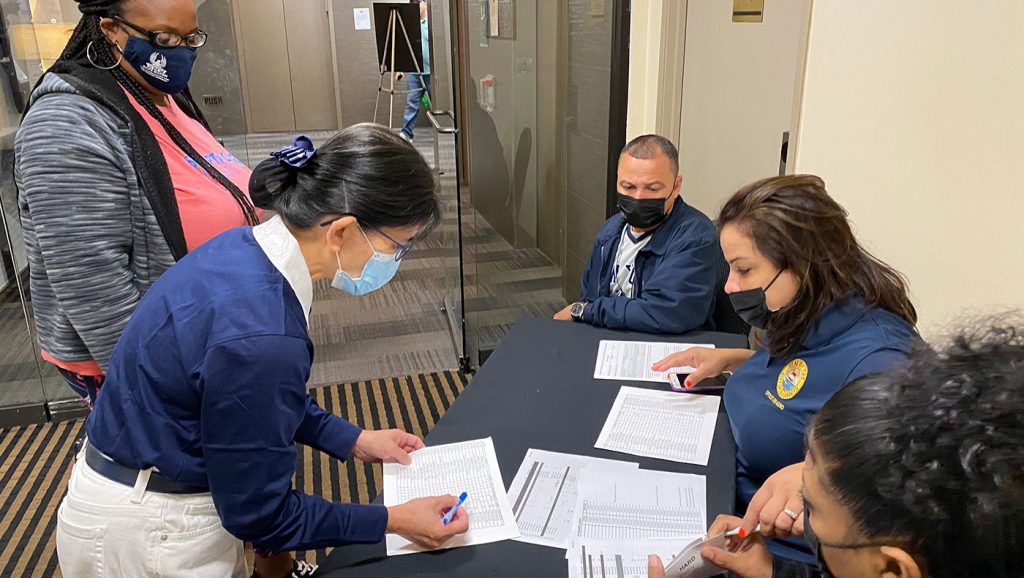 Preparations carefully completed, a volunteer guided families to their seats where a performance of the song, “Love and Care,” lifted spirits before distributions officially got underway. Jigong Zhou, the Deputy Executive Director of the New Jersey chapter, also introduced the origins of Tzu Chi and read a heartfelt message from Tzu Chi’s founder, the venerable Dharma Master Cheng Yen. 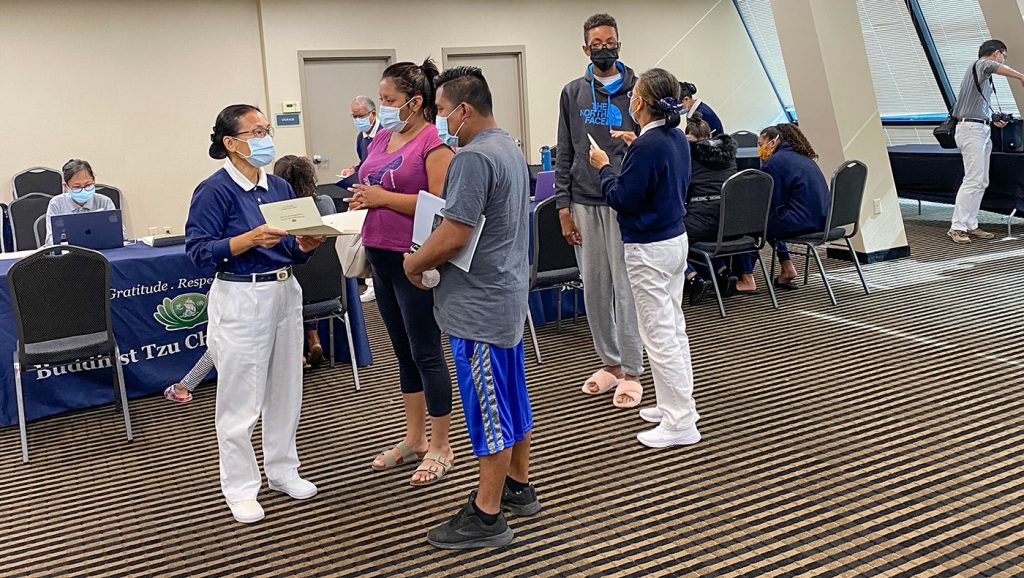 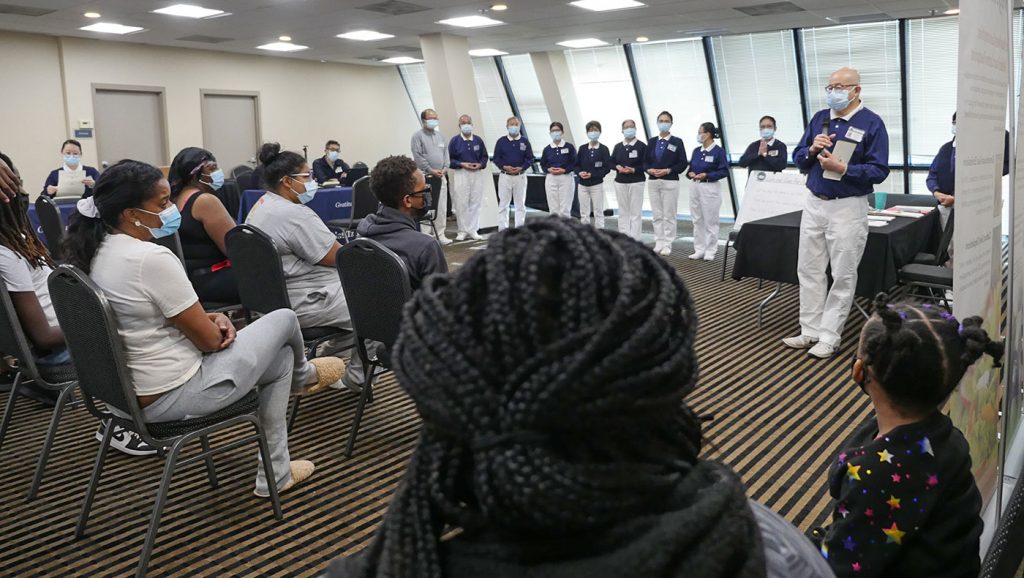 Families at the event recounted their harrowing experiences from that night to volunteers. And even despite the loss of their homes and material possessions, the strength of survivors shone through. They expressed their thanks to volunteers as well, not only for the monetary relief but the genuine care they felt at the distribution. Guests were especially interested in the process of creating DA.AI Technology’s eco-friendly blankets, each of which is crafted from approximately 70 reclaimed plastic bottles.

Nilaja Watkins, a third-grade teacher, lived in a basement apartment and thankfully escaped from the flood unharmed, although her home was declared uninhabitable. She now faces numerous challenges. However, Nilaja still feels lucky. She was sincerely grateful for Tzu Chi’s dedication to the community. Nilaja also expressed her hopes of giving back by upholding Tzu Chi’s mission to protect the environment, and planned to share the story of DA.AI Technology’s eco-blankets with other teachers and students at school. 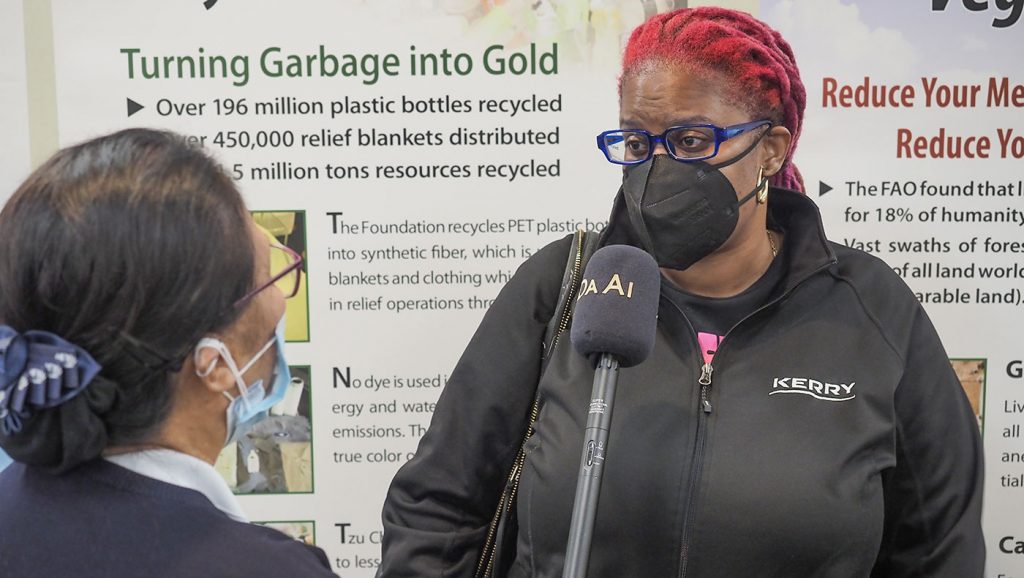 Nilaja, a teacher, plans to share the story of DA.AI Technology’s eco-blankets with teachers and students at her school. Photo/Shuchao Liao 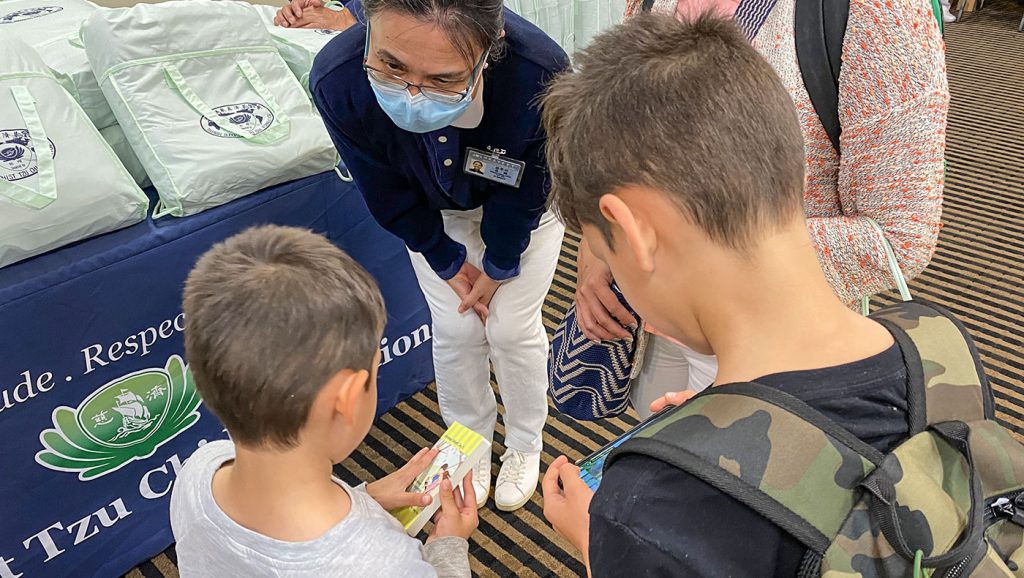 Volunteers answer questions about the eco-blankets at the local relief distribution. Photo/Shaozhen Liu

Passing On Their Experience With Love

Tzu Chi Collegiate Youth Association (Tzu Ching) volunteers were in charge of reviewing qualifications and distributing cash cards for this event. Although this was their first time participating in disaster relief, these bright young individuals had learned quickly and worked together seamlessly. One of the youth volunteers, Lijuan Guo, also reflected upon a sentiment expressed by several care recipients, saying, “The flood survivors were very touched by the distribution and thanked Tzu Chi volunteers for their timely help. In the future, they would like to join the ranks of volunteers and show the power of love together.”